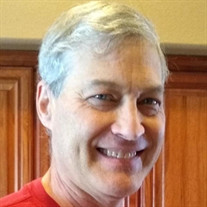 David William Dressen, 59, of Pueblo West, died Wednesday, December 15, 2021 at Parkview Hospital. He was born October 16. 1962, in St. Paul, MN to William & Patricia (Graham) Dressen. On August 28, 1982, he married Sue Longsdorf. They met at the University of Minnesota, Institute of Technology and moved to Pueblo, Colorado where David was employed at Sperry-Unisys. David worked as an Electronics Engineer most of his career, retiring from Cobham as Senior Manager, Failure Analysis Engineering in December, 2019. He specialized in the Failure Analysis field and RFID Smart card products, and creating procedures for preventive measures at five semiconductor companies. During his working career, he always knew where he was going to work for next. He even took time off for several months between companies to remember that life wasn’t all about work. While employed at Atmel, David has two patents: Three Port RF Interface Chip, July 2007, and the Bi-Directional Serial Interface for Communication Control, December, 2007. Fishing was his passion. Over the years, David charted & mapped Lake Pueblo. Being a detailed person, let’s just say he wrote an in-depth guide. He also went on an annual fishing trip to Blue Mesa with his friends. In 2008, David and Sue went to Alaska on a 10-Day fishing trip where they brought home 200 plus pounds of fish as check-in luggage. He carried the extra fish as carry-on luggage. He was a member of IEEE, NRA, Pueblo West Sportsman Association as well as a multitude of other organizations. He also held leadership roles in Cub Scouts & Boy Scouts of America for over a decade. After retiring, David connected with friends from the past. He enjoyed working on planes, boats, & automobiles. He especially looked forward to his Sestronix meetings. David is survived by his wife, Sue Longsdorf of Pueblo West, CO; Son, Phillip (Meredith) Dressen, grandsons: Declan & Connor of Broomfield, CO; parents, William “Bill” & Patricia “Pat” Dressen of Roseville, MN; & brothers: Mike (Carol) Dressen of Roseville, MN; Dan (Karen Osterbrock) Dressen of Lincoln, NE; & Tim (Michele) Dressen of Roseville, MN. There will be a Celebration of Life in the Spring, 2022. Plant a tree in memory of David.

The family of David William Dressen created this Life Tributes page to make it easy to share your memories.

Send flowers to the Dressen family.