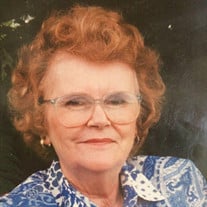 Elizabeth (WINTERS) McKibbon, beloved mother and grandmother was born on August 31, 1926 to Tom Beaumont Rigby and Bertha Trevor-Nicholl Rigby in Taroom, Queensland, Australia and passed on July 8, 2017 at the age of 90 in Pueblo, CO. She came to the United States as a WWII war bride in 1946. Elizabeth was married to Lawrence "Larry " Winters for 50 years before his death. She was later married to John McKibbon in 2001 until he passed away in 2012. Elizabeth and Larry spent many years in Lamar, CO working and raising their 5 children. She spent several years working in the school system while her own children were growing up. She later worked in hotel management with Best Western and Quality Inn Hotels where she was successful for many years. For many years Elizabeth and Larry lived in Canon City, CO where she was managing the Quality Inn. Elizabeth was president of the Canon City Chamber of Commerce and was very active in the community. Elizabeth was preceded in death by her parents Tom and Bertha Rigby, sister Suzanne Langhorne, brother Toby Rigby and granddaughter Stacy Winters. Elizabeth is survived by her son Michael Winters and wife Sharon (Burnett) of Granada, CO, daughter Paula Anderson and husband Mark Anderson of Spring, TX, daugher Lisa Hampton and husband Rick Hampton of Pueblo West, CO, son Toby Winters and wife Beverly (Mc Fee) of Blakeslee, PA and daughter Celia Ann Laurich of Elizabeth, CO along with 5 grandchildren and 9 great grandchildren and numerous friends and extended family members. Elizabeth is also survived by her brother Bruce Rigby and several nieces, nephews, cousins and close friends in Australia.

Elizabeth (WINTERS) McKibbon, beloved mother and grandmother was born on August 31, 1926 to Tom Beaumont Rigby and Bertha Trevor-Nicholl Rigby in Taroom, Queensland, Australia and passed on July 8, 2017 at the age of 90 in Pueblo, CO. She came... View Obituary & Service Information

The family of Elizabeth Mary McKibbon created this Life Tributes page to make it easy to share your memories.

Send flowers to the McKibbon family.