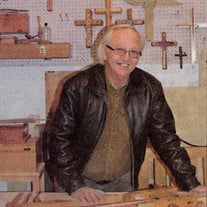 Jim Getts had a natural knack for woodworking and putting together intricate, elaborate pieces to make beautiful creations. It was a passion that he thoroughly enjoyed during his retirement years. "I couldn't wait to retire," Getts said, "Because when I retired five or six years ago, I knew what I wanted to do. I wanted to go to my garage and build." And that he did. Getts made all kinds of wooden items, from benches to bookcases, chairs and tables to jewelry boxes and wall art. He learned much of it on his own, showing his natural ability for the art. "When I was probably in junior high my mother had a little rocking chair that I refinished and it turned out really cool," Getts said. "I thought, 'I like this!" and from that point on, I always loved woodworking and the mechanical type of thing." Out of high school, Getts had the opportunity to work in a mill in San Antonio, where he was taken under the wing of two men who, combined, had about 75 years of experience. He worked there for a year and a half and they taught Getts a lot, but eventually they "chased me out because, during those times, you couldn't make a living doing that." Instead, it became a side hobby for Getts, who spent his workday running stores, and once he retired had more time on his hands, he was able to spend more time doing what he truly loved. Somewhat out of the blue, local artist Ed Posa "wandered up my driveway one day" many years ago and he and Getts eventually became good friends. A few years later, Posa invited Getts to put some of his items in a show for charity in Albuquerque, so Getts gave it a shot. "I sold my first piece, a little sofa table, for $1,800!" Getts said. "I about died when that man bought it for that kind of money. It's a thrill to do all of that, because the money goes for scholarships." Getts had done some shows locally, including a show at Pueblo Bank and Trust. Some of his offerings included wooden crosses, which "went like crazy," Getts said. Most often, whatever Getts was creating was specifically requested by someone. His customers were happy to wait however long it took for the piece to be perfect. "I enjoy the challenge of making it all work together and fit," Getts said. "To put it together and have everything fit very well... I'm very meticulous and extremely fussy. If it doesn't fit, then it doesn't go. It takes a lot of time and if the pieces don't fit right, then I do it until they do. A lot of handwork." Getts said he isn't out to "sell 17,000 pieces" with his art, but instead loves the creation and making people happy. All his designs are his own, and he gets much of his inspiration from southwest designs, like carpets and Indian apparel. Any time he wanted to, Getts made his way to his workshop at his Pueblo West home, where he had been for more than 15 years, and worked on his next great creation. After initially getting lots of large power tools and fancy items, he said he went back to mostly hand tools and what works best for him and his craft. ~ Article written by Kristen M. White, Pueblo West View on Thursday, January 10, 2013 ~

Jim Getts had a natural knack for woodworking and putting together intricate, elaborate pieces to make beautiful creations. It was a passion that he thoroughly enjoyed during his retirement years. "I couldn't wait to retire," Getts said, "Because... View Obituary & Service Information

The family of James "Jim" Clarence Getts created this Life Tributes page to make it easy to share your memories.

Jim Getts had a natural knack for woodworking and putting together...

Send flowers to the Getts family.