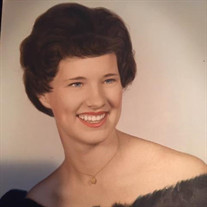 Judy Ann (Torri) Cramer passed away February 20, 2020 at the age of 74. She is survived by children: Ken (Lanette) Cid & Cherie (Perry) Lizer; Grandchildren, Daniel Cid, Abigail Cid, Matthew Lizer, Nicholas Lizer and Sarah Lizer. Preceded in death by parents: Georgie Torri and Paul Torri Sr. Judy worked many jobs throughout her life. She worked as a secretary for a brief time. She then began her employment with the state of Colorado at the then titled “Colorado State Hospital”, in the nutrition services. After 20+ years, Judy retired, but only for a short time. Her next journey in to the working world was at Pueblo Sam’s Club. She held many positions there, including sample lady, café staff and front door member greeter. Along the way, Judy made many friends and would become a sort of substitute mom for her younger colleagues, being given the name by some of “Mamma Judy”. After 20 years at Sam’s club, Judy again retired. Judy very much enjoyed spending time in our Colorado Mountains, either on a day trip with the grandkids or weeks long summer camping vacations when her own children were young. Although she would often say she couldn’t play a radio, she enjoyed supporting her children in their musical pursuits. Another example of her love for her children is the fact that she allowed an in ground swimming pool in her back yard, despite her very powerful fear of the water. As a child herself, she enjoyed roller skating at “Skateland”. Judy was a 1963 Graduate of Centennial High School. The great loves of Judy’s life were by far her four grandchildren, Daniel, Abby, Matthew and Nicholas. While we grieve our earthly loss, we maintain hope and faith in the promises of God’s eternal love, through our Lord Jesus Christ. Memorial service, 10:00 am, Saturday March 7, 2020 at Pueblo West Baptist Church

The family of Judy Ann Cramer created this Life Tributes page to make it easy to share your memories.

Send flowers to the Cramer family.