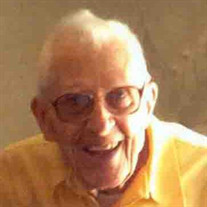 L. W. “Buzz” Elias, 95, passed away peacefully on Feb. 21, 2016 with family present at Sharmar Village. Buzz was born Nov. 6, 1920 in Hoisington, KS, grandson of homesteaders, son of Cliff and Florence Elias. The family moved to Pueblo in 1926. Pursuing a journalism career, he attended P.J.C. and D.U. before WWII moved him to enlist as Naval Aviator. While in service, he met and married Jean Armstrong, a Navy nurse. They settled in Pueblo after the war, where they raised three children. Buzz was in sales with Folger’s Coffee in Pueblo and the San Luis Valley towns. Later he owned the Stone Hall Co. in Denver, a grocery brokerage. His hobbies were flying, music, golf, writing freelance and travel. At age 92, he received an Honor Flight tour of Wash., D.C. He leaves to cherish his memory daughters Rebecca Gabrielli and Abigail (Don) Gaylord and son Scott (Nancy) Elias. He also leaves 7 grandchildren and 10 great grandchildren. He is pre-deceased by his wife Jean, by his parents, and by his sister, Berneice Rae (Marion “Unc”), nieces, Lynn and Glee and son-in-law Mario, and also by his devoted friend Jim Wark. Memorial service, 11:00 a.m. Saturday, July 30, 2016 at Wesley United Methodist Church, 85 Stanford Ave., Pueblo, Colo. Memorials may be made to Frontier Hospice & Home Health or to Denver Rescue Mission.

The family of L. W. "Buzz" Elias created this Life Tributes page to make it easy to share your memories.

Send flowers to the Elias family.