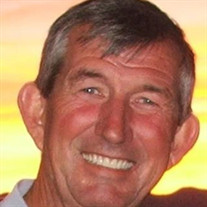 William Thomas Bekeza, 71, of Pueblo West, CO, passed away peacefully on Saturday, February 5, 2022. Bill (Zeke) was born in Howell, MI on April 26, 1950 and moved with his family to Chicago Heights, IL in 1954. He was preceded in death by his parents Lewis & Kay Bekeza; his brother, Pat Bekeza; and his sister, Doreen Bekeza. He is survived by his wife of 26 years, Jackie; his 3 daughters, Jayde (Joe) Easton, Taylor (Tom) Clarke, and Laycee (Travis) Rexroth; 6 grandchildren, Beck (Lindsey) Easton, Lexi Easton (Leroy Mora); Graycie and Maddie Joe Easton, Saydie and Sophie Rexroth, Jayce Clarke; 3 great grandchildren, Easton Mora, Samuel and Stella Easton; his sister, Barbara Carter and brother, Mike Bekeza. Bill graduated from Bloom Township High School in Chicago Heights IL in 1968 and then went on to college at (SCSC/USC) CSU-Pueblo CO. He was inducted for basketball in the Hall of Fame at CSU-Pueblo with the team of 1971-72. Bill has always been an avid golfer and has won several tournaments including City Park Championship and Canon City Open many times. He was a member of the Pueblo West Desert Hawk Golf Course Men’s Club for many years and successfully won several of their tournaments. Because of his love of golf, he was always willing to mentor the younger up-and-coming golfers in town. He loved playing golf with anyone and everyone. He was a railroad engineer for Missouri Pacific and then Union Pacific Railroad until his retirement in 2005. He always enjoyed gambling in Cripple Creek and going to Las Vegas. He married Patricia (Taravella) Bekeza in 1971 and had 3 daughters. Together they owned the Dairy Dutchess and Bekeza’s Gift Shop for a short time. After his divorce, he met Jacqueline (Doyle) Bekeza back in Chicago at a Class Reunion. Bill and Jackie were friends since the 6th Grade in 1961. They were married in 1994 in Pueblo West. In 2001 they purchased the Tumbleweed Tavern in Pueblo West until they sold it to their daughter and son-in-law, Taylor & Tom Clarke in 2016. There will be no viewing. A celebration of his life will be held at 3 p.m. Sunday, February 20, 2022, in the Desert Hawk Golf Course Cart Barn (dress appropriately because of no heat). Paster Beck Easton, Bill’s grandson, will be officiating the service. Following immediately, there will be an “Irish Wake” at the Tumbleweed Tavern. There will be an open mic at the Tumbleweed and we would appreciate you sharing your stories about Bill (Zeke). In lieu of flowers or those who desire to make a donation, we support the Sangre de Cristo Hospice, 1207 Pueblo Blvd. Way, Pueblo CO 81005. Their employees were the first angels Bill met on his journey to Heaven.

William Thomas Bekeza, 71, of Pueblo West, CO, passed away peacefully on Saturday, February 5, 2022. Bill (Zeke) was born in Howell, MI on April 26, 1950 and moved with his family to Chicago Heights, IL in 1954. He was preceded in death by... View Obituary & Service Information

The family of William Thomas Bekeza created this Life Tributes page to make it easy to share your memories.

Send flowers to the Bekeza family.