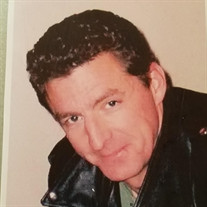 William Joseph “Bill” Paolino, 54, was born January 2, 1965, in Denver, Colorado to William H. Paolino and Kathleen (Turnbull) Paolino. He lost his battle with cancer on February 15, 2019. Bill lived the majority of his life in Canon City where he attended Canon City Public schools, kindergarten through the 12th grade. After graduation, he joined the U.S. Navy and was stationed aboard the U.S.S. Midway in Japan. He was a very talented artist, leaving behind numerous beautiful pencil and watercolors for his family. His artistic abilities enabled him to be a fantastic embalmer and funeral director in his family’s funeral homes. At one point in his life, Bill moved to North Dakota where he worked in salt wells. He and his wife, Lori, lived in Epping, ND where he was very involved in the town’s government and was Mayor. While living in North Dakota, he became a member of the Masonic lodge and Shrine Club. He was a proud member of the Choctaw Nation of Oklahoma. Bill is survived by his wife, Lori; his mother and stepfather, Kathleen and Rockey Wells; his siblings, Shawn (Demi) and Valerie (Ben); children, Shelby, Jacob, Summer and Raquel; grandchildren, Porter, Paislie, Dalilah, and Jerrico; nieces, Eden and Sophia; and numerous aunts, uncles, and cousins. He was preceded in death by his father, William (Bill) Paolino; maternal grandparents, Douglas and Myrtle Turnbull; paternal grandparents, Joe and Janie Paolino; uncle, Douglas Turnbull and special cousin/friend, Jeff Bollig.

The family of William Joseph Paolino created this Life Tributes page to make it easy to share your memories.

Send flowers to the Paolino family.